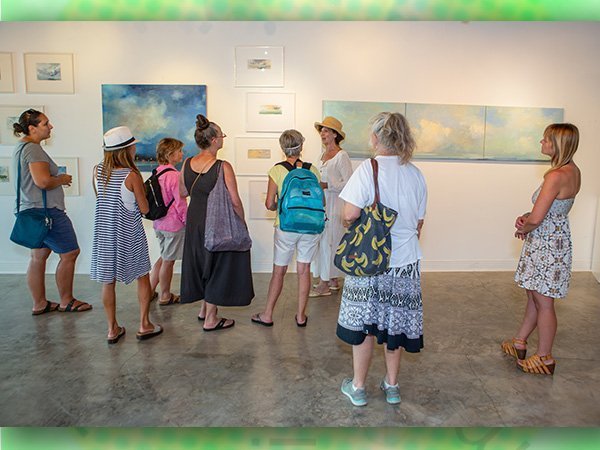 The Studios of Key West will hold a special mid-month reception on Thursday, August 15 from 6-8pm to welcome new work into the Sanger Gallery. A selection of small format watercolors by students of Susan Sugar’s Summer Solstice workshop, as well as the ongoing restoration of a large-format sculpture by late Key West artist Jon McIntosh, will be on display.
Key West/New York artist and teacher Susan Sugar is inspired by the sky at sunset. Having originally trained as dancer, Sugar’s work is deeply influenced by movement, and her paintings are imbued with a sense of musicality and rhythm. Each summer solstice, she leads a small group of watercolor enthusiasts to the beach for several days to capture the sky at sunset. A selection of student watercolors will be shown alongside one of Susan’s own in the Sanger Gallery.
The exhibition will feature work by Elizabeth Chamberlain, Cricket Desmarais, Natalia Duke, Elizabeth Hanes, Frances Lee Larkin, Kathy Letarte, Colleen McIntyre, Marcy Moyer, Morgan Ridler, Robin Robinson, Susan Seroskie, Emma Starr, and Rita Troxel.
Also on view in the Sanger Gallery is a sculpture by artist Jon McIntosh. “Tosh” was a renowned designer, illustrator, and painter, and beloved member of the island arts community. Tosh was an accomplished sculptor as well, and his 15-foot-tall palm-tree pencil sculpture was one of the standouts of the 2011 Sculpture Key West exhibit at Fort Zachary Taylor.
Working on a mostly volunteer basis, local sculptor Craig Gray will restore the palm-tree pencil sculpture, and plans to bring it back to its original glory over the next few months. Having first met Tosh at The Studios of Key West in 2011, Gray quickly grew close to the fellow sculptor, and considered him a good friend and mentor. The Studios of Key West is pleased to host the first stage of the sculpture’s restoration this summer, allowing the public an opportunity to see a part of the process. Materials for the restoration of the sculpture will be purchased by a Special Project Grant from the Florida Keys Council of the Arts.
Both shows will remain on view at The Studios of Key West, 533 Eaton Street, through September 19. More information can be found at www.tskw.org.
Image: Students of Susan Sugar’s 2018 Watercolor class. Credit: Johnny White.