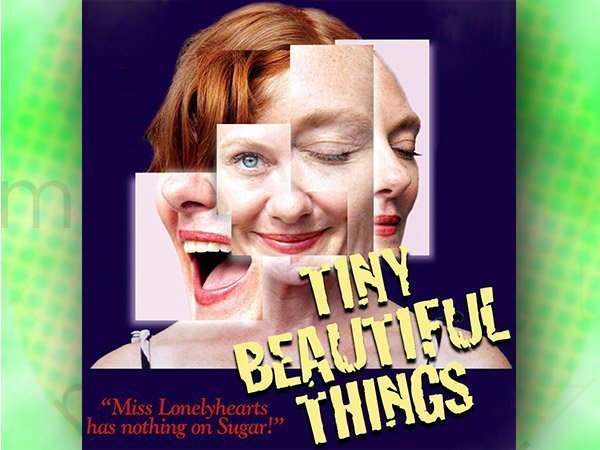 ‘TINY BEAUTIFUL THINGS’ OPENS RED BARN’S 40TH ANNIVERSARY SEASON
How do you open your 40th Anniversary Season of professional theater? What play could possibly encompass and express the full range of what’s been accomplished on the same stage you’ve trod for those forty years and at the same time give your patrons a kind of love letter for all their support?
This was the dilemma Artistic Director Joy Hawkins faced as she went about planning this landmark season at Key West’s iconic Red Barn Theatre. And to all our benefits, Ms. Hawkins found a beauty.
The Red Barn will open its landmark fortieth season with the powerful, endearing, lovely, illuminating, often funny, sometimes heart-rending, and always relatable “Tiny Beautiful Things” – and yes, all those descriptors aptly fit this play – which was adapted for the stage by Broadway and film star Nia Vardalos (“My Big Fat Greek Wedding”) from Cheryl Strayed’s smash hit book of the same name.
“Tiny Beautiful Things” opens Tuesday, December 10 and runs through Saturday, January 4, 2020. The Red Barn is at 319 Duval Street, in the courtyard behind the Woman’s Club.
The story centers around a woman – a non-descript homemaker in a non-descript town – who calls herself “Sugar”, and who finds herself inheriting an online advice column. Not having any experience in such a realm, Sugar just starts winging it, dispensing what she calls a kind of “radical sincerity” to those whose letters she receives.
(Spoiler Alert: “Sugar” was the nom de plume of author Strayed, who, between 2010 and 2012, actually wrote an advice column for an online literary magazine. Her book – and now this play – chronicles those years and her experiences.)
Key West’s Nicole Nurenberg takes on the role of Sugar, supported by David Black, Morgan Fraga Pierson, and Arthur Crocker as the various letter writers who interact with Sugar over the internet. Hawkins directs.
The beauty of the play is in how everyone in the audience will be able to relate to the letter writers in some way, as they will no doubt see themselves and something of their own lives expressed by the actors on the stage. It’s a beautifully-written expression of the similarity of the problems we all face as human beings…we all struggle when our loved ones die, we all tend to have a terrible time letting go of grudges, anger is easy, forgiveness is hard.
Some of the letters Sugar receives are wacky, a good many are ribald (this is certainly an adult play), and a few are profoundly sad. They are all looking for help of some kind. Sugar, being new and not knowing any better, embraces not having pat solutions to her callers’ harrowing problems, and shares some of her own experiences of addiction, abuse, chaos, and loss.
In doing so, Sugar teaches us all how to pick ourselves up after tragedy. She insists that it’s the “tiny, beautiful things” that make up the love that pulls us from the abyss. It’s the reaching out that helps us move past what we don’t need anyway, that helps us leave our worst selves behind.
There will be a Reduced-Price Preview on Monday, December 9. Ticketholders for the Opening Night on December 10 are invited to join cast and crew for an Opening Night party after the performance that evening. For those planning their holidays, there will be a special Christmas Night performance (no performance Christmas Eve) and another on New Year’s Eve (no performance New Year’s Day). All curtains are at 8 pm. The play runs about 80 minutes, no intermission.
For more information and tickets, visit redbarntheatre.com or call the Box Office at 305-296-9911.
“Tiny Beautiful Things” is sponsored by KONKLife Magazine, Wonderdog Studios, Design Group Key West, and is supported by the Tourist Development Council and the State of Florida Division of Cultural Affairs.