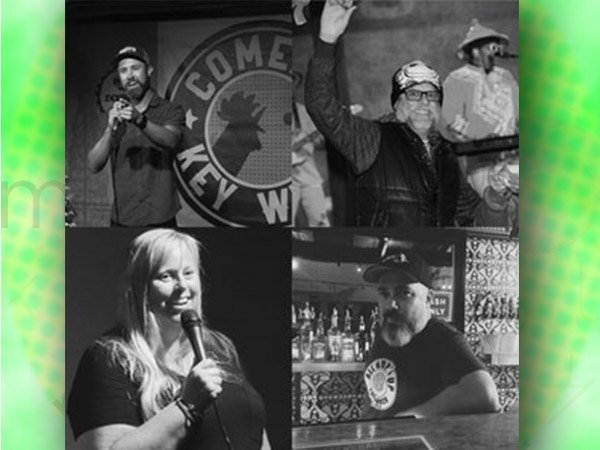 Key West Theater and The Big Stage Productions presents
Those People feat. Kathy Gilmour, Landon Bradbary, Pony Charvet and Joe Madaus (Back Stage Listening Room)
Tickets $25.00
Doors: 6:30 pm / Show: 7:00 pm
Key West Theater - Back Stage Listening Room
This event is 21 and over
Come hang with “Those People” better known as Kathy Gilmour, Landon Bradbary, Joe Madaus and Pony Charvet for an evening of outrageous fun in the Back Stage Listening Room. Sit back as some of Key West’s most hilarious personalities remove the brakes and barrel down the road of original sketch comedy. You'll laugh, you may even cry and you're sure to have a good time!
Landon Bradbary
Landon Bradbary moved to Key West 16 years ago from New York City. He formally trained at the Neighborhood Playhouse School of the Theatre. Eventually he decided to throw all of that to the wind and hosted Key West Burlesque for 10 years, developing an irreverent and off the cuff style as his character “Frankie”. Since then, he has produced shows at the Key West Theater, First Flight and has been a regular host at the Tropic Cinema. He shares his place on this planet with his son, Tiberius, His love, Tricia, and His Dog, Pepper.
Kathy Gilmour
Originally from the Boston area, Kathy has lived in Key West for more than a decade. She has performed weekly with Comedy Key West for 2 years and has headlined shows at the Key West Theater, The Green Parrot, Comedy Key West and San Carlos Theater. Kathy has also emceed many events around Key West and is a radio show host. Check out her weekly podcast & blog at www.thegilmourgirl.com.
Pony Charvet
Pony Charvet originally from Seattle Washington has been seen performing around the Key West theater scene as Buffalo Bill in “Silence of the Lambs The Musical” Fagin in “Oliver” and a Tijuana dancing hooker in “Oklahoma Smith”.
In 2018 he was inspired by his comedy mentor Joe Madaus to step onstage at Comedy Key West. Pony has performed weekly at the Blue Room in Key West and with the Orlando Improv.
Venue Information:
Key West Theater - Back Stage Listening Room
512 Eaton Street
Key West, FL, 33040