An event every month that begins at 2:00 pm on day First of the month, repeating until March 1, 2020 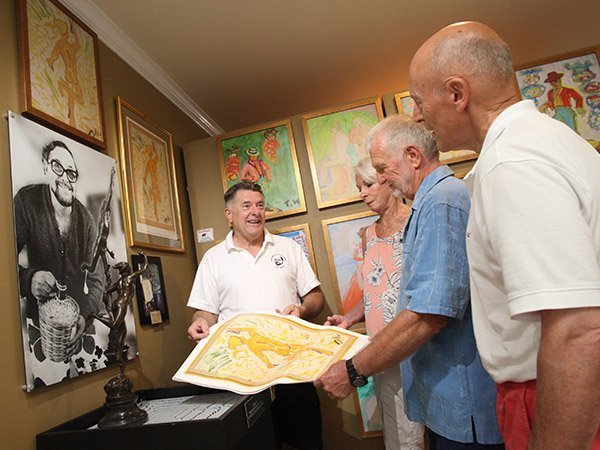 Tennessee Williams Museum to offer monthly first Sunday curator tours; free entry for locals
The Tennessee Williams Museum, located at 513 Truman Avenue, will offer a series of tours led by Museum Curator Dennis Beaver starting Sunday, January 5 from 2:00pm - 3:00pm. The January tour will focus on the premiere of “The Rose Tattoo,” William’s classic film based on his Tony Award-winning Broadway play of the same name and which debuted at the San Carlos Institute on January 19, 1956.
“Williams wrote both the play and the screenplay and oversaw the making of the film in Key West while living at his home on Duncan Street in the early 1950s,” says Beaver. “He said he could write anywhere but he could write best in Key West.”
The award-winning museum is already a destination for Tennessee Williams enthusiasts and scholars, with an impressive collection of Williams’ memorabilia and literary artifacts that help keep alive the importance of his legacy and the impact of the literary icon who made Key West his home from 1949 until his death in 1983.
Displays include artist Jane Rohrschneider-Carper’s model of the playwright’s Duncan Street home, first edition plays and books, images from the late local photographer Don Pinder, and a new collection of photographs featuring Williams and celebrities of his era, many of whom were featured in his film and theater productions.
“We especially hope to raise awareness in our local community of the many contributions made by this literary giant to the city of Key West and Monroe County,” says Beaver. “His choice of having a home in our city on Duncan Street for thirty-four years helped to make Key West the cultural and literary destination it is today.”
Key West Art & Historical Society honors locals the first Sunday of every month with free admission to the museum and three other properties under its stewardship—the Custom House Museum, Key West Lighthouse & Keeper’s Quarters, and Fort East Martello Museum. A merger with the Society in 2017 supports the exhibit and a continuing full roster of writing and painting contests, film forums, and the annual Tennessee Williams Birthday Celebration every March.
Subsequent Tennessee Williams Museum curator tours will be Sunday, February 2 and Sunday, March 1, both from 2:00pm – 3:00pm. The Tennessee Williams Museum on 513 Truman Avenue is open daily for self-guided tours 9:30am-4:30pm daily. For more information, contact Key West Art & Historical Society at 305-295-6616 or visit WWW.KWAHS.ORG.  Your Museums.  Your Community.  It Takes an Island.
Image: Tennessee Williams Museum curator Dennis Beaver, left, will be leading a curator tour once a month beginning on Sunday, January 5 at the museum located at 513 Truman Avenue.