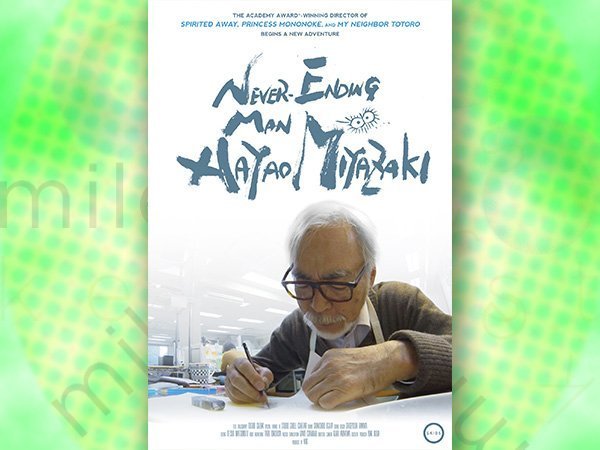 Key West Art & Historical Society to Present Art & Artists Summer Film Series at Tropic Cinema
Beginning July 30, Key West Art & Historical Society will launch a Tuesday night “Art & Artists” summer film series at the Tropic Cinema, 416 Eaton Street. The films, curated and hosted by Society board member and cineaste Michael Shields and other special guest experts, start and 6:00pm and run through Tuesday, September 17. “Never-ending Man,” a documentary film about Academy Award-winning director Hayao Miyazaki, will be the first to screen.
Japanese animator and director Hayao Miyazaki has delighted audiences young and old across the globe with his hand-drawn animation mastery and storytelling that includes “My Neighbor Totoro,” “Spirited Away,” and “Princess Mononoke.”  Though he “retired” in 2013 at the age of 72, his desire to create is reignited after meeting a group of young animators who specialize in computer graphics, and he decides to make a short film using this newer technology to explore expressive possibilities.
“Never-ending Man” is a behind-the-scenes reveal of the struggles that unfold as he wrestles for the first time with CGI, a computer software that creates special visual effects. The process proves so difficult he almost calls it quits. Will the short film he releases change the future of Japanese animation?
Films to follow are: “Walking on Water,” an intimate portrait of Christo and the stakes of large-scale art (August 13), the animated wonder “Chico and Rita” (August 27), “Kevin Roche: The Quiet Architect” (September 10), and “Russian Ark,”  a film that moves through 33 rooms of St. Petersburg’s Hermitage Museum (September 17). Tickets are $10 and can be purchased at TropicCinema.com. For more information, visit kwahs.org, click “Tickets.”  Your Museums.  Your Community.  It takes an Island.
IMAGE: Key West Art & Historical Society’s new summer film series at the Tropic Cinema kicks off on Tuesday, July 30, with “The Never-ending Man.”