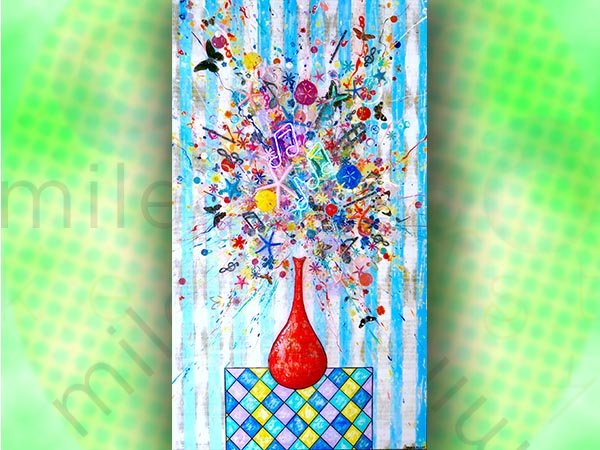 Kreg Kelly opens ‘According to Who?’ at SALT
For the month of February, SALT Gallery (830 Fleming St., www.saltislandprovisions.com) will feature “According to Who?”, a new collection of whimsical mixed-media paintings by local artist Kreg Kelley. To celebrate Kreg’s new works, SALT will be hosting an opening reception at the gallery from 5-7 p.m. on Friday, Feb. 7.
A Key West-based artist as of summer 2013, Kreg won his first art award at the age of 12 with the Connecticut Scholastic Art Awards Program for a drawing entitled “Holocaust.” Throughout his teenage life he experimented in different artistic mediums, but it wasn't until 2003 that his art became more of a full-on hobby. Aside from abstraction and 3D works on canvas, he incorporates damaged antique engravings and artifacts from the 18th and 19th centuries into his pieces. Several of his pieces are in world-renowned chef Gerry Garvin's restaurant in Hollywood and he participated in a group show in NYC featuring works by Yoko Ono. In the summer of 2010 his painting of "Washington, DC: Night in the City Series" was chosen to be featured in the national calendar for the American Civil Liberties Union.
Kreg’s works hang on walls across the world, including Amsterdam, Canada, Brazil, Greece, Denmark, Norway, Russia, Australia, France, Japan, Italy, Spain and the U.K. Most notably, his works hang in the homes of the former King of Spain, Doc Rivers and actress/comedian Jane Lynch. Upon moving to Key West, Kreg immediately became an active member of The Arts Council Of The Florida Keys, The Anne McKee Art Fund and The Studios of Key West. Throughout his time in Key West, Kreg has donated artwork to such organizations as The Florida Keys SPCA, The Sister Season Fund, The Key West Wildlife Center, The Special Olympics of the Florida Keys, WOMANKIND, The Trevor Project and AH Monroe.
Although he spent many years living in urban areas, Kreg has adjusted quickly to island life. “One of the main reasons I moved to Key West was to focus on my work and the tropical beauty of Key West is not only relaxing but also conducive to my creative process,” Kreg explains. “While DC was a fantastic part of my life, offering some of the best inspirational art in the world at the Smithsonian Institute or the Philips Collection, the island life is much more my cup of tea. I prefer the ‘stop and smell the roses’ way of life, and this environment is perfect for that.”
“We are so excited to have Kreg back at SALT,” says gallery owner Laura Richardson. “It’s been such a pleasure to watch his work evolve over the past couple of years. I’m particularly loving the new pop sensibility he’s weaving into his work — it’s more colorful and intricate than ever! ”
“Over the past two years, I’ve really gained a foothold in the artistic scene in Key West,” Kelley says. “As an independent artist, I’m always trying to expand my reach, including showing in Ft. Lauderdale, and expand my artistic boundaries. With ‘According to Who?’ I tried to reinvent the wheel in my own style by pushing classical art forms into the 21st century. I respect the masters while modernizing their techniques.”
SALT Gallery features an eclectic collection of local art, local sea salts, jewelry, pottery, wine and Florida Keys honey. Gallery owners Maria Sharpe and Laura Richardson feature a new artist each month at SALT. Kelley’s work will remain on display until the end of February. For more information, call 305-517-6088 or visit www.saltislandprovisions.com.