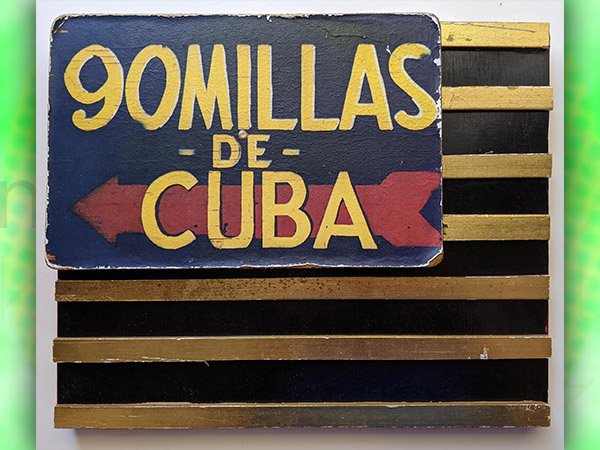 An exhibit of Richard Kemble's art will be on view through the month of November at Salt Gallery (830 Fleming St., www.saltislandprovisions.com). The Gallery is proud to present a survey of his half century of creativity in woodcuts and oil pastels and his American flag collages.
Kemble was on the faculty of the State University of New York and Pratt Institute but gave up academics after receiving one of the first printmaker’s fellowships from the National Endowment for the Arts in the 1960s. Kemble’s work is included in more than 100 public collections, including New York's Museum of Modern Art, The Key West Art and Historical Society, The New Jersey State Museum and the Cape Cod Museum of Art. He is well known for his woodcut editions, which number over 350. He had studios in Bucks County, Nantucket and Key West.
The exhibition at SALT will feature Kemble’s Windows series, a group of pieces executed in his Key West studio during the winter of 2004. This burst of energy using sheets of gold leaf and strong colors was the last of Kemble’s major output before his death in 2007 in Key West.
The exhibition will also include a variety of Kemble's flag collages. In 1975 and 1976, a series of over 100 "flag" collages were created which were all 10 x 12 inches. Using a variety of materials including rags, discarded materials and the like, this creative output was the subject of several exhibitions during the Bicentennial year. Kemble continued to create "flag" collages, drawings and oil pastels in spurts of creativity up until his death. The estate is still discovering caches of these flag collages.
Kemble's art continues to work magic on the viewer. His legacy is still to be discovered.
An opening reception will be held at SALT on Friday, November 5 from 5-7 p.m. In addition, “RICHARD KEMBLE - A RETROSPECTIVE,” a book co-authored by George Korn and Thomas Livingston, both of Key West, will be featured with a book signing.
SALT Gallery features an eclectic collection of local art, local sea salts, jewelry, pottery, wine and Florida Keys honey. Gallery owners Maria Sharpe and Laura Richardson feature a new artist each month at SALT. Kemble’s work will remain on display until November 30. For more information, call 305-517-6088 o