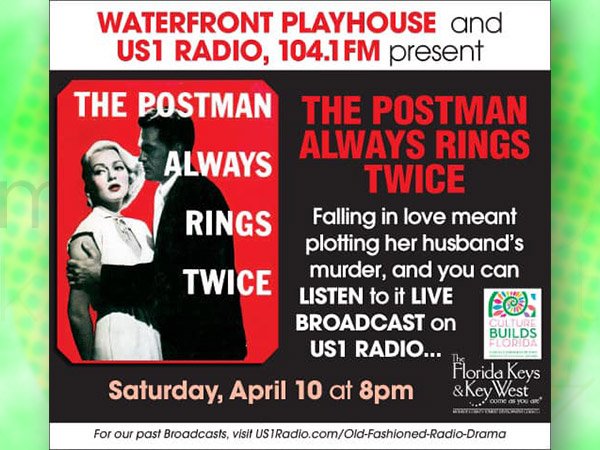 The Waterfront Playhouse will present
THE POSTMAN ALWAYS RINGS TWICE as the next offering in its popular On The Air Series. It will be Broadcast on at 8pm Saturday April 10 on 104.1 FM or US1Radio.com
Featuring Susanna Wells, Ross Pipkin, David Black and John McDonald.
For those patrons who would like to make a contribution, please visit: www.waterfrontplayhouse.org
This show, as with all of the Waterfront Playhouse On the Air broadcasts are available following the show by going to us1radio.com/old-fashioned-radio-drama/
The Postman Always Rings Twice is a 1946 American film noir based on the 1934 novel of the same name. Drifter Frank Chambers arrives at a quiet California roadside restaurant where he meets and falls for drop-dead gorgeous Cora, the wife of restaurant owner Nick Smith. After weaseling his way into a job, the two begin a deadly love affair and cook up plans to end her marriage and start a new life together. The 1946 movie starred Lana Turner and John Garfield.