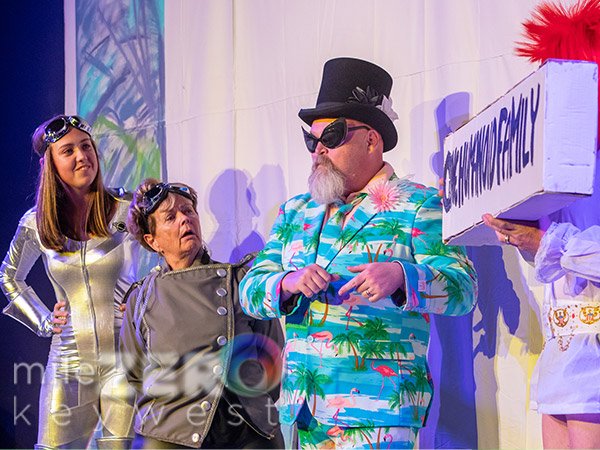 Earlier this month, The Studios of Key West sent out a challenge to the island’s creative folk: to come together to write, rehearse, and create backdrops for four brand-new ten minute plays...in only 24 hours. The dramatic result, One Night Stand, unfolds before a live audience on June 25, with shows at 7pm and 9pm at The Studios. Tickets are $35/$30 mbrs, and are on sale now.

One Night Stand is an exciting event that encourages people to produce some of their best and brightest work,” said Gwen Filosa, emcee of this year’s event. “I loved writing my first play in 2016 and watching the cast and crew bringing it to life. And it’s just fun.”

The night before the show, the surprise elements are revealed: a secret line and prop, which playwrights must work into each brand new script. But that’s where the similarities end.

“You really have no idea what you’re going to get till the curtain goes up,” said Elena Devers, deputy director. “We’ve had comedies, musicals and tragedies, and plays that take place everywhere from Mars to the set of Wheel of Fortune.”

Working from headshots of actors they’ve pulled at random, playwrights work overnight to create a brand new ten-minute play. Four freshly penned scripts are delivered to The Studios’ office by dawn the next morning.

On Saturday morning, the actors, directors, artists, stagehands and volunteers pick up the creative baton. They spend the day memorizing lines, rehearsing plays, creating sets, and making or finding props and costumes.

The results are always surprising. When the curtain rises, actors rely on imagination, coffee, and in a pinch, a lot of improv to wow the audience.

For more information or to buy tickets, contact The Studios of Key West at 305-296-0458 or info@tskw.org. Tickets can also be purchased at The Studios’ box office at 533 Eaton Street .