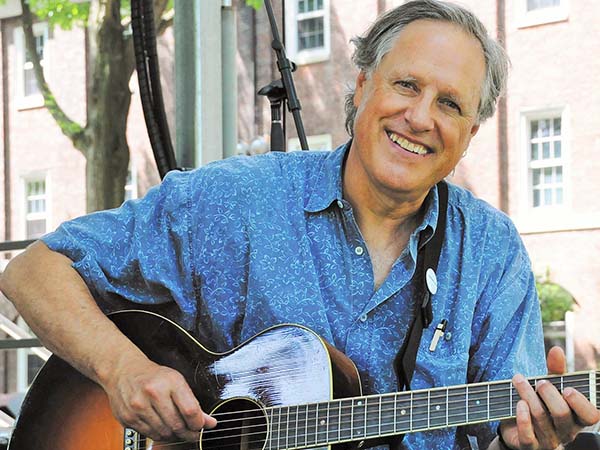 Dynamic Old Town New Folk Season Coming to The Studios of Key West in 2022
Contemporary Folk stars perform both indoors and on the rooftop terrace at The Studios
Over the past decade, The Studios of Key West has established itself as the place to experience America's great singer-songwriters. This year, The Studios introduces a new spin on their Old Town New Folk series, by offering open-air rooftop concerts atop Hugh’s View, a gorgeous terrace with stunning views of Key West, in addition to the indoor concerts audiences have come to love.
Considered “one of the great personalities in contemporary folk music” by The New York Times, three-time Grammy Award-winner Tom Chapin kicks off the season with a rooftop concert on January 13, followed by a performance in the Helmerich Theater on January 14. Chapin has entertained, amused, and enlightened audiences of all ages for more than forty years.
“We’re bringing half a dozen of America’s most exciting singer-songwriters to the island this season,” said Jay Scott, Development Director of The Studios. “Great music, fantastic stories and more than a few laughs along the way. What more could you ask for?”

Susan Werner plays the Helmerich Theater stage on February 4 and Hugh’s View on February 6. Werner composes skillful songs that effortlessly slide between folk, jazz and pop, all delivered with sassy wit and classic Midwestern charm.  All Music Guide says, "Werner is in such complete command of her gifts that it’s almost scary.”
"With our New Folk series, The Studios creates a space where audiences can get up close and personal with musicians," continued Scott. "Now with a rooftop terrace soaring high above Key West, there's just no other place like it to hear live music."
Grammy-nominated musician Mary Gauthier performs February 12 and 13. Gauthier, whose songs have been covered by Tim McGraw, Blake Shelton, Kathy Mattea and Jimmy Buffett, will also spend a month as an Artist-in-Residence at The Studios, where she’ll be writing and creating new songs.
The music season continues with the most promising young talent on the scene, including Dead Horses, a modern Americana band with soulful roots, on February 25 and 26, and Ellis Delaney, who’s known for her captivating voice and thoughtful, uninhibited lyrics on March 25 and 26.
Closing out the season is Dom Flemons on May 11 and 12. A founding member of the Carolina Chocolate Drops, two-time Emmy-nominee Flemons has a repertoire covering over 100 years of early American popular music. He masterfully plays everything from banjo and harmonica to fife and rhythm bones.
Tickets and details for all concerts are available by calling 305-296-0458 or visiting tskw.org. The Old Town New Folk season is sponsored by Blue Heaven.