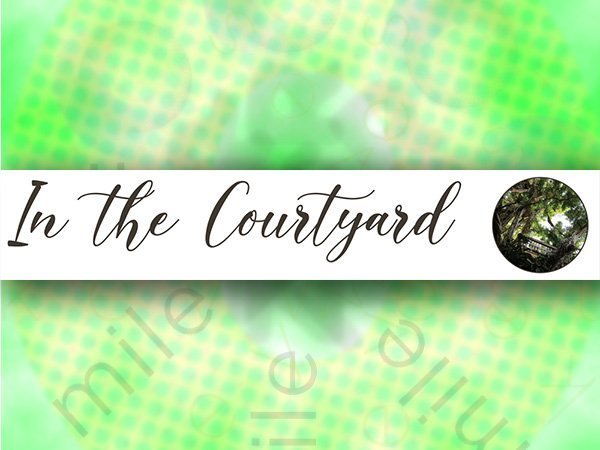 In The Courtyard
Because of the Thanksgiving holiday, we are bumping our residency potluck up by a week.
Please join us on WED NOV 20 from 6-8PM in the Courtyard at the residency guesthouse, 529 Eaton Street
Please bring an appetizer, salad, dessert or snack...we'll supply the drinks!
Harry Aspinwall is a Scottish-American queer and neurodivergent writer and actor. His written work focuses on historical and speculative fiction and their intersection with queerness, and has created cult followings, appearing in The Huffington Post, Buzzfeed, the Nerdist, Tor.com, Hypable, and Geek and Sundry (and he got tweeted out by “Goosebumps” author RL Stine once). He’s a current finalist in the Sundance Screenwriting Lab.
Nicholas Boggs is currently at work on a literary biography of James Baldwin, forthcoming from Farrar, Straus, and Giroux in the United States, Bloomsbury UK, and Editions Seuil in France. He is co-editor of Baldwin’s collaboration with French painter Yoran Cazac, Little Man, Little Man: A Story of Childhood (Duke 2018). He teaches in the Department of English at New York University.
Jessica Frances Grégoire Lancaster has studied in Paris, Washington DC, and New York City. She received her BFA in Fine Art Photography from the Corcoran College of Art + Design and holds an MFA in Studio Art from New York University. She has participated in multiple group exhibitions throughout the United States, including the AXA Art Prize (formerly the XL Catlin Art Prize) hosted by the San Francisco Institute of Art, Linda Warren Projects, and the New York Academy of Art, juried by curators from the Metropolitan Museum of Art, the Whitney Museum, MoMA, and Gagosian Gallery. Most recently her painting has been shown at the Tokyo Metropolitan Art Museum.
Courtney Young is a writer of fiction, screenplays, popular culture criticism and creative nonfiction. Her fiction has been published in Hypertext Review, and more; her nonfiction has been published by The American Prospect and The Nation. She is a recipient of writing residencies from Willapa Bay Air, Vermont Studio Center, Faber, Hambidge, Bainbridge and Chateau D’Orquevaux. She is the founder of Think Young Media Group, a boutique company that specializes in creating film, TV and documentary projects.