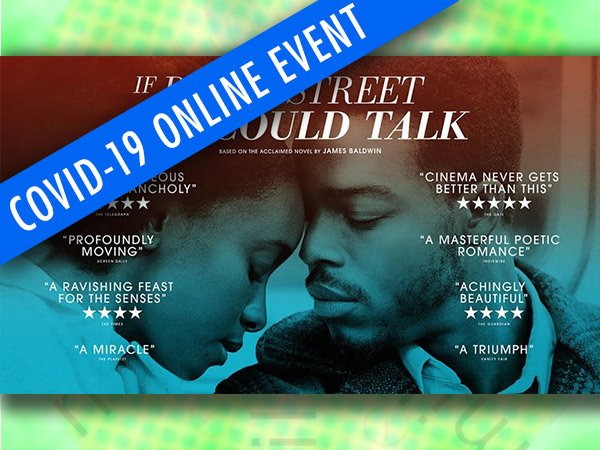 IF BEALE STREET COULD TALK
Featuring a Special Message from
Los Angeles Times Critic: Justin Chang
Justin Chang, Chief Critic with the Los Angeles Times, comes to you with a special message, and a movie recommendation for IF BEALE STREET COULD TALK. The movie was screened at KWFF 2018, and he and Emily Yoshida of Vulture introduced the movie with a discussion prior: https://www.youtube.com/watch?v=PBDBd4kKhkI&feature=youtu.be&utm_source=The+Master+List&utm_campaign=aa9c904273-EMAIL_CAMPAIGN_2020_05_01_09_35_COPY_04&utm_medium=email&utm_term=0_e9dcd26fd1-aa9c904273-275502797

Dido wrote a song almost 10 years ago about whether love can be celebrated when oppression stifles so many. It’s called No Freedom. At a time when we need to love one another more than any in modern history, the George Floyd tragedy makes Dido’s question even more relevant. How can there be love without freedom?  To see much progress made toward repainting the ugly faces of racism and then have something this callous happen is....unthinkable.   KWFF wants to remind you that BLACK LIVES MATTER. And we have a responsibility to do everything we can to help remind our members and patrons that we need to bond together in solidarity to make them ACTUALLY matter.   Over the years, we have tried to play a role in featuring films that shed light on injustice and help create meaningful conversations about actionable change.  In 2019, we featured the Oscar-nominated film, JUST MERCY. The film stars Jamie Foxx and Michael B. Jordan in a horrible miscarriage of justice. Outlets are streaming this movie for free right now and you can access it on most major platforms or by using the link here.  In 2018, we had the honor of Justin Chang, Chief Film Critic for the Los Angeles Times, presenting Barry Jenkins' IF BEALE STREET COULD TALK with Emily Yoshida from Vulture. The movie was nominated for three Academy Awards, which included a win for Best Supporting Actress for Regina King. It is...for better or worse...about facing racism every day.  Justin was kind of enough to include the message above about how the film resonates even more with the recent tragedies inflicted upon African Americans.  So few of us really know what it’s like to face racism once - much less every day. The best shot we will have is for a filmmaker to help us see it through the eyes of a character in a film like IF BEALE STREET COULD TALK.   If you’ve seen it, it’s worth seeing again. If you haven’t, you’re in for an incredible treat. I would like to leave you with one request though as a take away.   When you finish the film, please consider making a commitment to take one specific action (no matter how small.) Outrage doesn’t bring change. Action does. Believe you can make a difference and show that BLACK LIVES MATTER.   Sincerely,   A. Brooke Christian   Founder and Chairman   KWFF
You can watch IF BEALE STREET COULD TALK on any of the below platforms:
YouTube
Google Play
Amazon Prime
Hulu
2018 Introduction to IF BEALE STREET COULD TALK with Justin Chang of the Los Angeles Times, and Emily Yoshida of Vulture: https://www.youtube.com/watch?v=9yMY0LRfa3E&feature=youtu.be&utm_source=The+Master+List&utm_campaign=aa9c904273-EMAIL_CAMPAIGN_2020_05_01_09_35_COPY_04&utm_medium=email&utm_term=0_e9dcd26fd1-aa9c904273-275502797