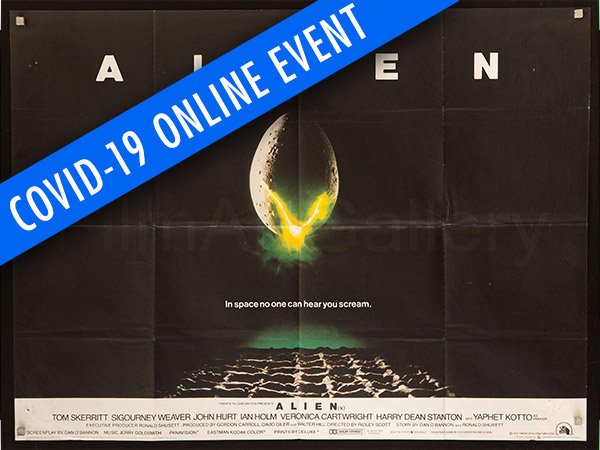 FLASHBACK FRIDAY
FRIDAY, MAY 29, 2020
GOLDEN KEY WINNER
Tom Skerritt &
40th Anniversary of ALIEN
Flashback Friday returns with a bit of fun and another twist this week. Be sure to read below and join our TikTok Challenge with the hashtags #KWFF and #KWFFMovieChallenge to win some great prizes in June!! We are also extending last week's raffle of the Platoon poster due to some technical difficulties. Visit the site here for your chance to win! The raffle has been extended until Friday, June 5th.
We were so excited in 2019 to host the 40th Anniversary Screening of the movie "Alien" and special guest Tom Skerritt, who was quickly a favorite attendee of the festival. We also awarded Tom Skerritt the 2019 "Golden Key Award" for his lifetime in film.
Tom Skerritt, who is a two-time Golden Globe nominee, won Best Actor for “Picket Fences” and has also appeared in more than 40 films including “Top Gun” (with former Key West resident Kelly McGillis!) was in attendance for the 2019 KWFF. He was interviewed at by Rolling Stone’s David Fear at the 40th anniversary screening of the seminal sci-fi film “Alien,” in which Skerritt played the part of Captain Arthur Dallas. “Alien” was also preceded by a screening of the award-winning short film “The Phantom 52,” which premiered at Sundance 2019 and stars Skerritt. Director Geoff Marslett was also in attendance at the Key West Film Festival.
See below for a couple of the amazing works by Skerritt and Marslett.
Stay safe, healthy, and sane! We hope to see you all in November!
~KWFF Team

KWFF Presents the TikTok Challenge!
You are challenged to recreate your favorite scene and/or musical score of your favorite movie. Please use hashtags #KWFF and #KWFFMovieChallenge to enter. We will be giving prizes throughout the month of June for winners, and will have some cameos from some Festival Favorites. Including a few examples below to get you started!
You can view "Alien" on the following platforms:
YouTube
iTunes
Amazon Prime Video
GooglePlay
And you can view "The Phantom 52" here:
Vimeo
Sundance YouTube
2019 Tribute Video for Golden Key Award Winner Tom Skerritt: https://www.youtube.com/watch?v=3xG4GlLJMgk&feature=youtu.be&utm_source=The+Master+List&utm_campaign=45f12b906b-EMAIL_CAMPAIGN_2020_05_01_09_35_COPY_03&utm_medium=email&utm_term=0_e9dcd26fd1-45f12b906b-275502797
Exclusive Interview at 2019 Key West Film Festival with Tom Skerritt: https://www.youtube.com/watch?v=uTm_guzAxtY&feature=youtu.be&utm_source=The+Master+List&utm_campaign=45f12b906b-EMAIL_CAMPAIGN_2020_05_01_09_35_COPY_03&utm_medium=email&utm_term=0_e9dcd26fd1-45f12b906b-275502797