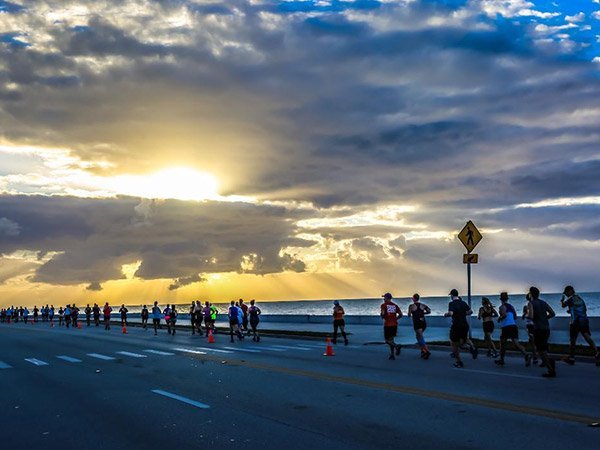 22nd Anniversary Key West Half Marathon & 5K Draws International Participants- January 19, 2020  It’s twenty-two years into the Key West Half Marathon & 5K, now a January staple event in the Southernmost City, and the races are expected to draw a record number of runners from countries far and wide.
Barb Wright, founder and co-director, said, “This race has firmly established itself as a truly international event, and we expect runners from all 50 states and 34 countries. It’s considered a ‘Destination’ race, where participants bring their friends and families to enjoy the sun in January.”
Barbara Wright/Race Founder and Co-Director said the annual race’s growing popularity is due in part to accolades from many other sports writers and renowned running media. It’s been named one of the U.S.’s leading winter half marathons; one of 14 Best Destination Half Marathons (Runner's World Feb. 2014); Bucket List Best Half Marathons (Runner's World April, 2015); in December, 2015 Competitor.com ranked it among 13 must-do U.S. half marathons; Last year, thousands of runners hailed from countries such as Slovakia, The Bahamas, Brazil, Switzerland, Costa Rica, Canada, Denmark, Germany, and the UK -- plus all U.S. states -- and similar stats or more are expected this year.
Competitor Magazine has ranked the race second in its 25 "Can't-Miss Half Marathons". It was listed among many long-standing and well-established races such as the San Francisco Half, Alamo 13.1 in San Antonio, the Yosemite Half, and Covered Bridges Half in Woodstock, VT.
The upcoming race’s headquarters is again at Half Shell Raw Bar and Turtle Kraals Restaurant. The event includes amenities such as collectible Alan S. Maltz photo zippered tech shirts guaranteed for each participant, unique finisher medals for both races, more musicians on the race course, 2-day registration, a pre-race pasta special, and more.
As always, the after-party will be had in typical Key West style – a concert by Howard Livingston and the Mile Marker 24 Band, beer courtesy of Shipyard Brewing Company, complimentary food, and a free raffle for all, which includes Caribbean trips.
The sporting challenge will begin on Sunday, January 19th at 7 a.m. on a fast 13.1-mile half marathon course amid the island city’s Victorian architecture, historic landmarks and harbor-front businesses. A 5K run is scheduled at 7:15 a.m. for those who prefer a shorter course. Now, more musicians and great volunteers will be along the course to cheer runners on. Also, on the race course, our sponsors Honey Stinger gels and Ultima Replenisher Sports Drink will be available to runners.
Awards await the first- through third-place male and female finishers in five-year age groups ranging from 9 and under to 75 and over, as well as the top overall competitors and those in the masters. Again each entrant will receive a gender-specific fully sublimated race shirt. Plus, unique and collectible medals will go to all Half Marathon finishers and to all 5K finishers.
Sponsors include: Monroe County Tourist Development Council, Half Shell Raw Bar, Turtle Kraals, Shipyard Brewing Company, Ice Pik Vodka, The Perry Hotel, Elite Island Resorts Caribbean, Alan S. Maltz Gallery, Endurance Imaging, and Ultima Replenisher. Shipyard Brewing Company, the official beer sponsor, is family owned with breweries in Maine and Florida. They will have some of their award-winning beers for runners, including their newly released Blue Fish IPA.
Our Charitable Partners include: Key West Sunrise Rotary scholarship programs, local school programs, College of the Florida Keys’ Youth Swim Program, and more.
For a full schedule and other information, like us on Facebook or visit keywesthalfmarathon.com. To register, visit Active.com or keywesthalfmarathon.com.