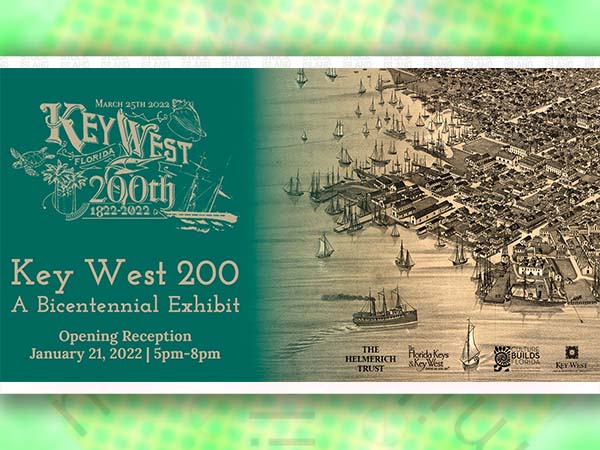 5-8pm
Custom House Museum
Event by Key West Art & Historical Society
Key West Art & Historical Society welcomes the public to a special reception on January 21, 2022 from 5:00 p.m. to 8:00 p.m. to celebrate the opening of the “Key West 200” exhibit at the Custom House Museum, 281 Front Street. This major exhibition commemorates the 200th anniversary of the first permanent settlement of Key West in 1822 and will be on display in the Bryan and Bumpus Galleries from through December 11, 2022.
The exhibit will highlight Key West’s people, culture and community beginning with the settlers and government officials who arrived on this remote island in early 1822. It will feature rarely displayed artifacts that tell the story of the people, industries, migration, culture and architecture that shaped Key West over the course of two centuries. Divided by decade, the exhibit emphasizes many of the significant moments and people that have influenced so much of what we celebrate today.
“In essence, Key West’s history begins very much like other traditional small towns dotting the country. The distinction between our island and other small towns, aside from the remoteness, is that once their local industries plummeted, they suffered long-term consequences with many residents relocating in search of fresh opportunities,’ says Cori Convertito, curator of the Key West 200 exhibit. ‘Not Key West. Residents have endured several industry collapses during its two-century history, but they regrouped, dusted themselves off and found the next successful business. Even now, in a way, the island continues to reinvent entirely as its ancestors did; this is owing to the persevering people who call this island ‘home’.”
Visitors to the exhibit will learn how Key West grew during its history through development and changes in migration patterns, advances in transportation and commerce, and historical milestones like the Civil War, the Great Depression and World War II. Centerpiece artifacts include sponging equipment; cigar roller tables and tools; 19th-century homewares, clothing, journals and photographs; Overseas Railway memorabilia; Ernest Hemingway’s boxing gloves; Native American tools; Key West Hand Print dresses and artwork created by Cuban-American folk artist Mario Sanchez.
“When developing this exhibition, it was important that we did not focus solely on the dates, events and people that most of us already know,” explains Convertito. “Museum visitors who imagine that Key West has always been a tourist destination will be delighted to discover that tourism is only a tiny portion of the story. The true breadth, depth and diversity of this island is so much more – a remarkably captivating history to celebrate.”
“Key West 200” opens on January 21, 2022 and is sponsored by the Florida Division of Cultural Affairs and The Helmerich Trust.