Around the World in 80 Days

Around the World in 80 Days 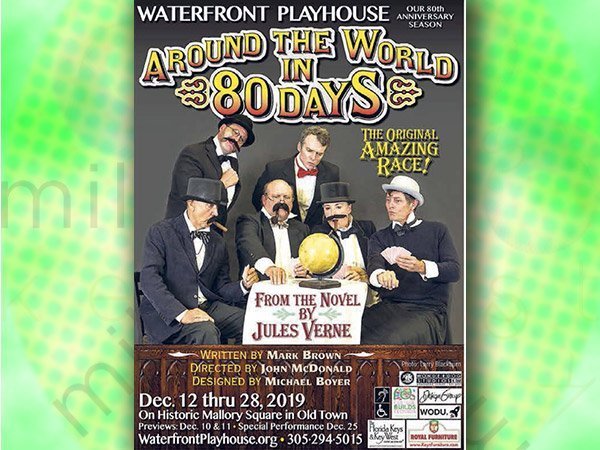 The Waterfront Playhouse, celebrating its 80th anniversary this season, will present the hilarious comedy “Around the World in 80 Days.”
This adaptation of the Jules Verne classic is by Mark Brown and runs through Saturday, Dec. 28.
Performances include special shows at 8 p.m. on Tuesday and Wednesday, Dec. 24-25.
Perfect for the entire family, “Around the World in 80 Days” is billed as the “original amazing race.” In a show that is filled with stampeding elephants, raging typhoons and runaway trains, the cast of six will go places viewers could only imagine.
The show is directed by John McDonald, who recently helmed “The Informer,” as well as playing Dr. Scott in
“The Rocky Horror Picture Show.”
It also features Nate Washburn as Phileas Fogg. Washburn has appeared in “These Seven Sicknesses,”
“Sarah Flood in Salem, Mass.,” and numerous other productions, as well as several commercials.
Ross Pipkin, who last appeared at the Waterfront in “Red Speedo,” will play Detective Fix, while Aaron Duclos, Erin McKenna, Steve Miller and Don Bartolone will play a multitude of characters.
Michael Boyer designed the set with Kim Hanson as lighting designer, Leigh Hooten as costume designer and Trish Manley as stage manager.