An Evening with Coffee Butler

An Evening with Coffee Butler 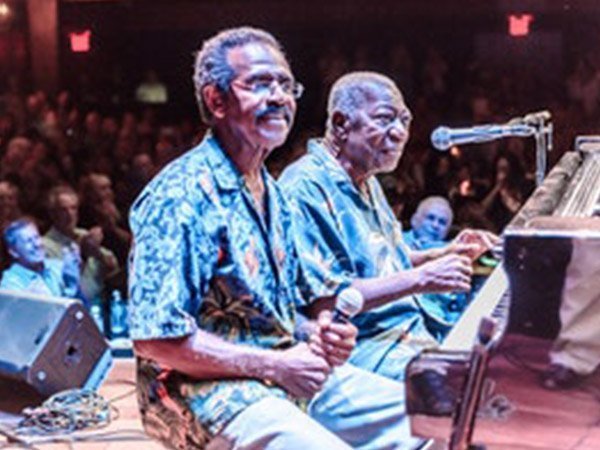 Key West Theater & Ralph De Palma Productions presents
An Evening with Coffee Butler & Friends
Tickets $30.00 - $50.00
Doors: 7:00 pm / Show: 8:00 pm
Lofton Coffee Butler and Friends returns to the Key West Theater September 29th.
This special performance will include homegrown Key West artists, Cliff Sawyer, Robert Albury, Clayton Lopez, Mina Lopez-Martin, and the Soul of Key West Band. The smooth vocals of Cliff Sawyer will melt the stage.  The "King of Key West Soul", Robert Albury will cover his idol Louis Armstrong and many others.  Clayton Lopez and his talented sister Mina will revive the classic soul sound of the Temptations, Smokey Robinson, and Aretha Franklin.  Master of Ceremonies, Will Thompson and Tom Luna will try to find out "Who Put the Pepper In the Vaseline."
Music Director Larry Baeder, will lead the Soul of Key West band including Ericson Holt, Ray Spence, Bubba Lownotes, and Joe Dallas. They will provide non-stop fun and great music doors open at 7PM music begins at 8PM.
Coffee Butler
Lofton "Coffee" Butler was born and raised in Key West. Family and friends called him Loffy except for one friend that kept mispronouncing Loffy as Coffee. Soon the name Coffee stuck.
After attending Francis Xavier School, Butler studied music at Frederick Douglass High School and learned to play the piano. His favorite musicians were Frank Sinatra and Louis Armstrong. Torn between music and baseball in his early life, Butler was encouraged by Ellen Sanchez, his high school music teacher, to pursue music. In the Jim Crow era, baseball, she felt didn't provide the opportunity that music would ultimately provide. Sanchez wrote a song The Beautiful Isle of Key West which Butler sang to Harry Truman during the dedication of Truman Avenue.

In the late 1940’s Butler and his father, Duke Butler, formed Duke and the Royal Aces and played the Imperial Cafe and the old Cuban Club. The band grew to nine performers, but the Korean War and the draft soon reduced their numbers to a quartet or even a trio, which became Coffee and His Cups. Their first big gig in Key West was at Johnny Neebo's Starlight Club on Duval. Many other clubs featured the band, including the Bamboo Room on today’s Applerouth Lane.
Coffee Butler was an outstanding shortstop and revered Jackie Robinson, who joined the Brooklyn Dodgers in 1947. Butler wanted to follow a career in baseball. After graduating in 1948, he tried out with the Negro league’s Kansas City Monarchs. Eventually, he played in the Florida/Cuba League from 1950-1951 for the Palm Beach Rockets.
Butler married Virginia Martha Carpentier, the love of his life, in 1957. Martha was a big reason for his long success and stable life. After 54 years of happiness, Martha passed away in 2011. Her favorite Coffee Butler song was Let Them Talk.
An encounter with the Beatles also figures in Butler’s story, although he doesn’t make much of it. On September 10, 1964 the Beatles were in Montreal enroute to a concert in Jacksonville, Florida. Hurricane Dora forced a detour of their flight to Key West. The Beatles stayed at the old Key Wester Hotel on South Roosevelt, now the Hyatt Windward Pointe. They were jamming all day with a number of different groups. After Butler finished his gig at the Hukilau, Herb Rosenburg took him to the Inner Room at the Key Wester and Butler joined in and played an old Fats Domino tune, Blueberry Hill. A large crowd was forming and the late hour caused the local police to ask that the music end. Beatles drummer Ringo Starr said, "Let the man play.”
Butler helped his Uncle Bill Butler rekindle The Junkanoos with their special Latin and Bahamian rhythms. The group featured percussionists Charles Allen, Kenny Rahming, Joe Whyms, and Alvin Scott. Harry Chipchase played trombone. Edwar Weech played saxophone, even though he had lost parts of his fingers in an explosion while serving in the Army. They appeared often at the Florida Folk Festival from 1977-1991.
Later Butler went solo with gigs at the Casa Marina and became a fixture at Allan Merrill's Hukilau on North Roosevelt (the current Homeland Security Office). One of his favorite gigs was playing with Jim Holt, Jack Holt, and Jack's wife Sheryl Lynn. He also performed with musicians Hector Barossa (saxophone), Buddy Chavez (drums), Bobby Lowe (bass), and Duke Yannacone (drums).
Butler said the owner of Howie's Lounge wanted to take him to Las Vegas and open a bigger venue. Coffee remained in Key West rather than moving to the big city to become a star because he remembered what happened to his good friend Fats Navarro and, he says, he "didn't want that to happen to me.” Fats Navarro, a legendary Key West trumpeter, succumbed to heroin at twenty-seven. Navarro left Key West after graduating from high school and became a huge sensation in New York before his life and meteoric career were cut short.
At the Tennessee Williams Theater in 2005, Coffee Butler, who was retiring from performing music, sang with his good friend Cliff Sawyer. Butler, named the Minister of Music years before in one of the original Conch Republic celebrations, passed the title onto Sawyer.
By Ralph De Palma
Soul of Key West www.rwdepalma.com
Cliff Sawyer
Cliff Sawyer was born and raised in Key West and has been singing since he was four years old.  The first song he ever sang was "Bad, Bad Whiskey" ...it could make you lose your happy home. Cliff sang in his church choir and at Douglas Elementary School. He played the kettle drums in his elementary school band but has mainly been a vocalist. He continued to sing while attending Key West High School and graduated in 1966.  Andy Johnson, Cliff’s friend at Key West High School, played guitar while Cliff sang.
Cliff remembers hearing street corner bands in the 1940's that included Fats Navarro singing and playing outside his window.  Cliff’s father played the trombone with Fats Navarro.
Cliff occasionally sat in with Coffee Butler at the Hukilau on North Roosevelt and usually sang an Al Green song "Let’s Stay Together.” In 2005, Cliff organized a concert at the Tennessee Williams Theater. The orchestra included many Key West musicians.   Performing in such a huge room was quite a contrast from the intimate clubs Cliff was used to. He said when he walked on the stage he couldn't see anyone in the cavernous venue because of the lighting. The concert included a special guest performance by Coffee Butler, who was introduced with a special rendition of "My Buddy.”  Coffee walked on stage and sang "A Wonderful World" with Cliff.