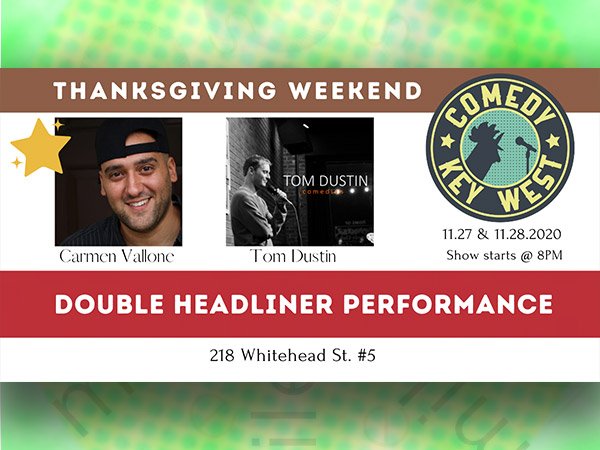 This week Comedy Key West presents a Thanksgiving Double Headliner featuring Carmen Vallone & our very own Tom Dustin, accompanied by your favorite Key West local comedians.
Carmen Vallone has performed on NBC’s Last Comic Standing & CBS’s Comedy Night School. Carmen Is now In his 12th year of comedy and has performed on so many stages, you might think he has been doing comedy for 13 years.
Our very own Tom Dustin co-headlines this post thanksgiving madness. If you’ve seen him open our shows you won’t want to miss his full set. Tom’s recent debut album, Dangerous Now, made it to the top 5 on iTunes. This Boston native and Key West import, is the only American to ever win the $25,000 Yuk Yuk's Great Canadian Laugh-off, (resulting in future contests being closed to American comics). He was also the winner of the Sam Adams Comedy Festival and has made appearances on Comedy Central.
Only 50 tickets per show. Doors open at 7pm, show starts at 8pm.
Tickets Now Available
https://www.comedykeywest.com/events/41984